An NFC chip is the integrated circuit component in an NFC tag that performs NFC operations. NFC chips do not work by themselves, they must be be attached to an antenna to form an NFC tag. There are several different NFC chip types available, each with its own features, performance, cost and availability. Several factors affect an NFC tags performance; most of which is not related to the NFC chip itself. NFC chip come from the manufacturer in a blank default configuration state, and often must be encoded to work with NFC software. 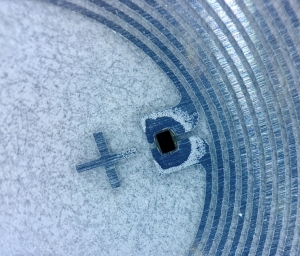 Most NFC chip types share a common set of specifications; the specific values do vary by chip, but this gives a general range.

NFC chips come from the manufacturer in a default “blank” state as defined by the technical specifications for that NFC chip. This blank state includes the format, the initial values of the user memory and the configuration of the NFC chip features. Often NFC software requires the NFC tags to be encoded before they will work in the software.

For chip types that are not pre-NDEF formatted, the initial state of user memory is all 0s and no formatting exists. The NFC tag can then be formatted and written to during encoding.

There are many different NFC chip types which adhere to several different NFC standards. Not all NFC devices can work with all NFC chip types; the specifications of the NFC chip must match the specifications of the NFC device. This issue is most prevalent with NFC reader/writers devices; as of the late 2010s most major smartphones can work with all NFC Forum tag types. The primary specification to look for when evaluating compatibility is the ISO (ISO 14443, ISO 15693 or both) and the NFC Forum tag type (Type 1 – Type 5).

The following companies are manufacturers of NFC chips: